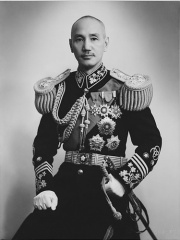 Chiang Kai-shek (31 October 1887 – 5 April 1975), also known as Chiang Chung-cheng and Jiang Jieshi, was a Chinese Nationalist politician, revolutionary and military leader, who served as the leader of the Republic of China (ROC) from 1928 to his death in 1975 – until 1949 in mainland China and from then on in Taiwan. After his rule was confined to Taiwan following his defeat by Mao Zedong in the Chinese Civil War, he continued claiming to head the legitimate Chinese government in exile. Born in Chekiang (Zhejiang) Province, Chiang was a member of the Kuomintang (KMT), and a lieutenant of Sun Yat-sen in the revolution to overthrow the Beiyang government and reunify China. Read more on Wikipedia

Chiang Kai-shek was the leader of the Kuomintang and the Republic of China from 1928 to 1975. He was a nationalist who led China through much of the Second Sino-Japanese War, World War II, and the Chinese Civil War.