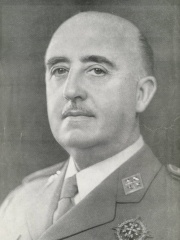 Francisco Franco Bahamonde (Spanish: [fɾanˈθisko ˈfɾaŋko βa.aˈmonde]; 4 December 1892 – 20 November 1975) was a Spanish general who led the Nationalist forces in overthrowing the Second Spanish Republic during the Spanish Civil War and thereafter ruled over Spain from 1939 to 1975 as a dictator, assuming the title Caudillo. This period in Spanish history, from the Nationalist victory to Franco's death, is commonly known as Francoist Spain or the Francoist dictatorship. Born in Ferrol, Galicia, into an upper-class military family, Franco served in the Spanish Army as a cadet in the Toledo Infantry Academy from 1907 to 1910. Read more on Wikipedia

Francisco Franco was a Spanish general and dictator who ruled Spain from 1939 until his death in 1975. He is most famous for the 36-year period of authoritarian rule during which he suppressed any opposition to his rule.

Among politicians, Francisco Franco ranks 67 out of 15,710. Before him are Pontius Pilate, Hurrem Sultan, Benjamin Franklin, Kim Il-sung, Nebuchadnezzar II, and Lorenzo de' Medici. After him are Ronald Reagan, Ivan the Terrible, Richard I of England, Nicolae Ceaușescu, Nikita Khrushchev, and Frederick I, Holy Roman Emperor.