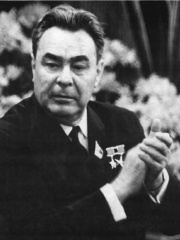 Leonid Ilyich Brezhnev (19 December 1906 – 10 November 1982) was a Soviet politician who served as General Secretary of the Communist Party of the Soviet Union between 1964 and 1982 and Chairman of the Presidium of the Supreme Soviet between 1960 and 1964 and again between 1977 and 1982. His 18-year term as General Secretary was second only to Joseph Stalin's in duration. Brezhnev's tenure as General Secretary remains debated by historians; while his rule was characterised by political stability and significant foreign policy successes, it was also marked by corruption, inefficiency, economic stagnation, and rapidly growing technological gaps with the West. Read more on Wikipedia

Leonid Brezhnev was the General Secretary of the Communist Party of the Soviet Union from 1964 to 1982. He is most famous for his rule as a Soviet leader, and for his role in the Cuban Missile Crisis.

Among politicians, Leonid Brezhnev ranks 91 out of 15,577. Before him are Nicolae Ceaușescu, Kösem Sultan, Francisco Franco, Philip II of Spain, George Washington, and Heinrich Himmler. After him are Louis XV of France, Giuseppe Garibaldi, Henry IV of France, Wilhelm II, German Emperor, Murad IV, and Uthman.