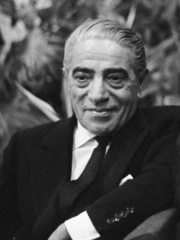 Aristotle Socrates Onassis (, US also ; Greek: Αριστοτέλης Ωνάσης, romanized: Aristotélis Onásis, IPA: [aristoˈtelis oˈnasis]; 20 January 1906 – 15 March 1975), was a Greek shipping magnate who amassed the world's largest privately-owned shipping fleet and was one of the world's richest men. He was married to Athina Mary Livanos (daughter of shipping tycoon Stavros G. Livanos), had a long-standing affair with opera singer Maria Callas and was married to Jacqueline Kennedy, the widow of US President John F. Kennedy.Onassis was born in Smyrna (modern-day İzmir in Turkey) and fled the city with his family to Greece in 1922 in the wake of the catastrophe of Smyrna. He moved to Argentina in 1923 and established himself as a tobacco trader and later a shipping owner during the Second World War. Read more on Wikipedia

Aristotle Onassis was a Greek shipping magnate who became one of the world's wealthiest people. He married Jacqueline Kennedy, the widow of President John F. Kennedy, in 1968.

Among BUSINESSPEOPLE In Turkey