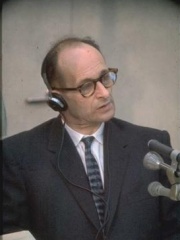 Otto Adolf Eichmann ( EYEKH-mən, German: [ˈɔtoː ˈʔaːdɔlf ˈʔaɪçman]; 19 March 1906 – 1 June 1962) was a German-Austrian SS-Obersturmbannführer and one of the major organisers of the Holocaust – the so-called "Final Solution to the Jewish Question" in Nazi terminology. He was tasked by SS-Obergruppenführer Reinhard Heydrich with facilitating and managing the logistics involved in the mass deportation of millions of Jews to ghettos and extermination camps in Nazi-occupied Eastern Europe during World War II. Eichmann was captured by Mossad agents in Argentina on 11 May 1960 and subsequently found guilty of war crimes in a widely publicised trial in Jerusalem, following which he was executed by hanging in 1962. After doing poorly in school, Eichmann briefly worked for his father's mining company in Austria, where the family had moved in 1914. Read more on Wikipedia

Adolf Eichmann was a German Nazi SS-Obersturmbannführer and one of the major organizers of the Holocaust. He was charged with facilitating and managing the logistics of mass deportation of Jews to ghettos and extermination camps in Eastern Europe during World War II.