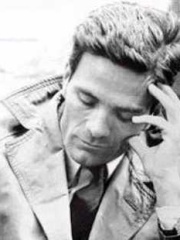 Pier Paolo Pasolini (Italian: [ˈpjɛr ˈpaːolo pazoˈliːni]; 5 March 1922 – 2 November 1975) was an Italian poet, filmmaker, writer and intellectual who also distinguished himself as a journalist, novelist, translator, playwright, visual artist and actor. He is considered one of the defining public intellectuals in 20th-century Italy, influential both as an artist and a political figure.A controversial personality due to his straightforward style, Pasolini's legacy remains contentious. Openly gay and a strong advocate for Christian values in his youth, he also became an avowed Marxist shortly after the end of World War II, while voicing strong criticism of petty bourgeois values and the emerging consumerism in Italy, juxtaposing socio-political polemics with a critical examination of taboo sexual matters. Read more on Wikipedia

Pier Paolo Pasolini was a poet, novelist, filmmaker, and intellectual. He is most famous for his film "The Gospel According to St. Matthew."