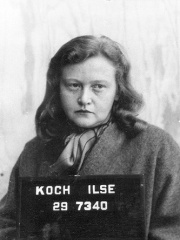 Ilse Koch (22 September 1906 – 1 September 1967) was a German war criminal who was an overseer at Nazi concentration camps run by her husband, commandant Karl-Otto Koch. Working at Buchenwald (1937–1941) and Majdanek (1941–1943), Koch became infamous for her sadistic, brutal treatment of prisoners. In 1947, she became one of the first prominent Nazis tried by the U.S. Read more on Wikipedia

Ilse Koch was a German woman who was the wife of Karl-Otto Koch, the Commandant of the Nazi concentration camp at Buchenwald. She was known for her love of collecting the tattoos from prisoners.

Among politicians, Ilse Koch ranks 697 out of 15,710. Before her are Faisal of Saudi Arabia, Joan I of Navarre, Camillo Benso, Count of Cavour, Gratian, Hideki Tojo, and Herbert Hoover. After her are Paul of Greece, Gallienus, Saparmurat Niyazov, Robert II of France, Lucius Tarquinius Priscus, and Afonso I of Portugal.