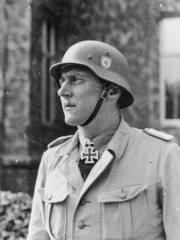 Otto Johann Anton Skorzeny (12 June 1908 – 5 July 1975) was an Austrian-born German SS-Obersturmbannführer (lieutenant colonel) in the Waffen-SS during World War II. During the war, he was involved in a number of operations, including the removal from power of Hungarian Regent Miklós Horthy and the Gran Sasso raid which rescued Benito Mussolini from captivity. Skorzeny led Operation Greif in which German soldiers infiltrated Allied lines by using their opponents' uniforms, equipment, language and customs. As a result, he was later, in 1947, charged at the Dachau Military Tribunal with breaching the 1907 Hague Convention, but was acquitted after a former British SOE agent F. F. E. Read more on Wikipedia

Otto Skorzeny was a German SS-Obersturmbannführer and war criminal. He was best known for his involvement in Operation Greif, which was a secret mission to capture the bridges over the Seine River during the Battle of the Bulge.