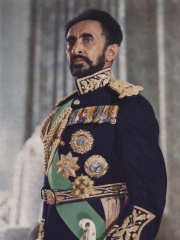 Haile Selassie I (Ge'ez: ቀዳማዊ ኃይለ ሥላሴ, romanized: qädamawi haylä səllasé, Amharic pronunciation: [ˈhaɪlə sɨlˈlase] (listen); born Lij Tafari Makonnen; 23 July 1892 – 27 August 1975) was an Emperor of Ethiopia from 1930 to 1974. Prior his coronation in 1930, he had been Regent Plenipotentiary of Ethiopia from 1916. He is a defining figure in modern Ethiopian history. Read more on Wikipedia

Since 2007, the English Wikipedia page of Haile Selassie has received more than 5,552,593 page views. His biography is available in 89 different languages on Wikipedia making him the 335th most popular politician.

Among politicians, Haile Selassie ranks 332 out of 14,801. Before him are George IV of the United Kingdom, Edward VI of England, Philip III of Spain, Charles V of France, Sigismund, Holy Roman Emperor, and Selim III. After him are José Mujica, Safiye Sultan, Sitting Bull, Victor Emmanuel III of Italy, Xi Jinping, and Semiramis.