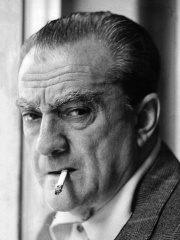 Luchino Visconti di Modrone, Count of Lonate Pozzolo (Italian: [luˈkiːno viˈskonti di moˈdroːne]; 2 November 1906 – 17 March 1976) was an Italian filmmaker, stage director, and screenwriter. A major figure of Italian art and culture in the mid-20th century, Visconti was one of the fathers of cinematic neorealism, but later moved towards luxurious, sweeping epics dealing with themes of beauty, decadence, death, and European history, especially the decay of the nobility and the bourgeoisie. He was the recipient of many accolades, including the Palme d'Or and the Golden Lion, and many of his works are regarded as highly-influential to future generations of filmmakers.Born to a Milanese noble family, Visconti explored artistic proclivities from an early age, working as an assistant director to Jean Renoir. Read more on Wikipedia

Luchino Visconti is most famous for his work on the Italian neorealist films, such as "Rocco and His Brothers" and "The Leopard."