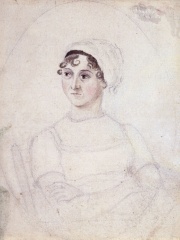 Jane Austen (; 16 December 1775 – 18 July 1817) was an English novelist known primarily for her six major novels, which interpret, critique and comment upon the British landed gentry at the end of the 18th century. Austen's plots often explore the dependence of women on marriage in the pursuit of favourable social standing and economic security. Her works critique the novels of sensibility of the second half of the 18th century and are part of the transition to 19th-century literary realism. Read more on Wikipedia

Jane Austen is most famous for her novels, such as Pride and Prejudice and Emma.

Among writers, Jane Austen ranks 56 out of 5,794. Before her are Charles Baudelaire, Aristophanes, Friedrich Schiller, Daniel Defoe, Euripides, and Bertolt Brecht. After her are Nikolai Gogol, Gustave Flaubert, Stefan Zweig, Sappho, Maxim Gorky, and Umberto Eco.