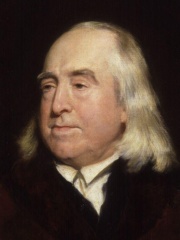 Jeremy Bentham (; 15 February 1748 [O.S. 4 February 1747] – 6 June 1832) was an English philosopher, jurist, and social reformer regarded as the founder of modern utilitarianism.Bentham defined as the "fundamental axiom" of his philosophy the principle that "it is the greatest happiness of the greatest number that is the measure of right and wrong." He became a leading theorist in Anglo-American philosophy of law, and a political radical whose ideas influenced the development of welfarism. He advocated individual and economic freedoms, the separation of church and state, freedom of expression, equal rights for women, the right to divorce, and (in an unpublished essay) the decriminalising of homosexual acts. He called for the abolition of slavery, capital punishment and physical punishment, including that of children. Read more on Wikipedia

Jeremy Bentham is most famous for his theory of utilitarianism, which is the idea that the moral worth of an action is based on its usefulness in increasing pleasure and decreasing pain.

Among philosophers, Jeremy Bentham ranks 78 out of 1,081. Before him are Epictetus, William of Ockham, Xenophanes, Jürgen Habermas, Ibn Arabi, and Friedrich Wilhelm Joseph Schelling. After him are Giovanni Pico della Mirandola, Claude Lévi-Strauss, Roger Bacon, Jean Bodin, Nicholas of Cusa, and Nagarjuna.