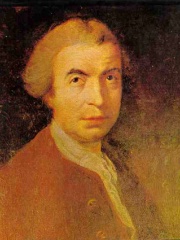 Roger Joseph Boscovich (Croatian: Ruđer Josip Bošković; pronounced [rûd͡ʑer jǒsip bôʃkoʋit͡ɕ]; Italian: Ruggiero Giuseppe Boscovich; Latin: Rogerius (Iosephus) Boscovicius; 18 May 1711 – 13 February 1787) was a physicist, astronomer, mathematician, philosopher, diplomat, poet, theologian, Jesuit priest, and a polymath from the Republic of Ragusa. He studied and lived in Italy and France where he also published many of his works.Boscovich produced a precursor of atomic theory and made many contributions to astronomy, including the first geometric procedure for determining the equator of a rotating planet from three observations of a surface feature and for computing the orbit of a planet from three observations of its position. Read more on Wikipedia

Among ASTRONOMERS In Croatia

Among astronomers born in Croatia, Roger Joseph Boscovich ranks 1. After her are Korado Korlević (1958).