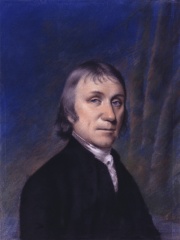 Joseph Priestley (; 24 March 1733 – 6 February 1804) was an English chemist, natural philosopher, separatist theologian, grammarian, multi-subject educator, and liberal political theorist. He published over 150 works, and conducted experiments in electricity and other areas of science. He was a close friend of, and worked in close association with Benjamin Franklin involving electricity experiments.Priestley is credited with his independent discovery of oxygen by the thermal decomposition of mercuric oxide, having isolated it in 1774. Read more on Wikipedia

Joseph Priestley is most famous for his discovery of oxygen.

Among philosophers, Joseph Priestley ranks 108 out of 1,081. Before him are Ibn Taymiyyah, Theophrastus, Wilhelm von Humboldt, Henri de Saint-Simon, Jacques Derrida, and Aristippus. After him are Friedrich Fröbel, Philo, Eusebius, Pyrrho, Meister Eckhart, and Charles Fourier.