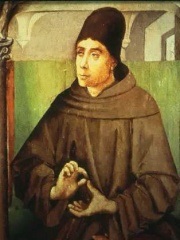 John Duns Scotus (c. 1265/66 – 8 November 1308), commonly called Duns Scotus ( SKOH-təs; Ecclesiastical Latin: [duns ˈskotus]; "Duns the Scot"), was a Scottish Catholic priest and Franciscan friar, university professor, philosopher, and theologian. He is one of the four most important Christian philosopher-theologians of Western Europe in the High Middle Ages, together with Thomas Aquinas, Bonaventure, and William of Ockham.Scotus has had considerable influence on both Catholic and secular thought. The doctrines for which he is best known are the "univocity of being", that existence is the most abstract concept we have, applicable to everything that exists; the formal distinction, a way of distinguishing between different aspects of the same thing; and the idea of haecceity, the property supposed to be in each individual thing that makes it an individual. Read more on Wikipedia

Among philosophers, Duns Scotus ranks 148 out of 1,081. Before him are Jiddu Krishnamurti, Clement of Alexandria, Simone Weil, György Lukács, Martin Buber, and Hans Kelsen. After him are Alexander Gottlieb Baumgarten, Kabir, Jean Baudrillard, Herbert Marcuse, Hippias, and Adi Shankara.

Among people born in 1265, Duns Scotus ranks 2. Before him is Dante Alighieri. After him are Beatrice Portinari, Temür Khan, Andrew III of Hungary, Alfonso III of Aragon, Henry of Bohemia, Emperor Fushimi, Ramon Muntaner, Lucia, Countess of Tripoli, María de Molina, and Andrew Moray. Among people deceased in 1308, Duns Scotus ranks 1. After him are Albert I of Germany, Mesud II, Chungnyeol of Goryeo, Emperor Go-Nijō, Otto IV, Margrave of Brandenburg-Stendal, George I of Bulgaria, Margaret of Burgundy, Queen of Sicily, Clare of Montefalco, Henry I, Landgrave of Hesse, Herman, Margrave of Brandenburg-Salzwedel, and Hayton of Corycus.