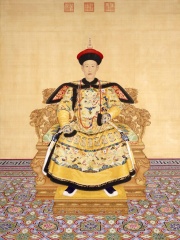 The Qianlong Emperor [tɕʰjɛ̌nlʊ̌ŋ] (25 September 1711 – 7 February 1799), also known by his temple name Emperor Gaozong of Qing, born Hongli, was the fifth emperor of the Qing dynasty and the fourth Qing emperor to rule over China proper, reigning from 1735 to 1796. The fourth son of the Yongzheng Emperor, he reigned officially from 11 October 1735 to 8 February 1796. In 1796, he abdicated in favour of his son, the Jiaqing Emperor, out of filial piety towards his grandfather, the Kangxi Emperor, who ruled for 61 years, so that he not officially usurp him as the longest-reigning emperor. Read more on Wikipedia

Qianlong Emperor is most famous for his patronage of the arts and the construction of the Summer Palace in Beijing.

Among politicians, Qianlong Emperor ranks 333 out of 15,577. Before him are Edward I of England, B. R. Ambedkar, Numa Pompilius, Edward V of England, Charles VIII of France, and Seti I. After him are Leopold II of Belgium, Louis XI of France, Henry IV, Holy Roman Emperor, Yitzhak Rabin, Alexander Dubček, and Elagabalus.