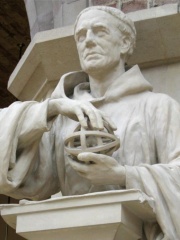 Roger Bacon (; Latin: Rogerus or Rogerius Baconus, Baconis, also Frater Rogerus; c. 1219/20 – c. 1292), also known by the scholastic accolade Doctor Mirabilis, was a medieval English philosopher and Franciscan friar who placed considerable emphasis on the study of nature through empiricism. In the early modern era, he was regarded as a wizard and particularly famed for the story of his mechanical or necromantic brazen head. He is sometimes credited (mainly since the 19th century) as one of the earliest European advocates of the modern scientific method. Read more on Wikipedia

Among philosophers, Roger Bacon ranks 75 out of 1,089. Before him are Antonio Gramsci, William of Ockham, Jürgen Habermas, Friedrich Wilhelm Joseph Schelling, Jeremy Bentham, and Anaxagoras. After him are Claude Lévi-Strauss, Epictetus, Zeno of Citium, Xenophanes, Giovanni Pico della Mirandola, and Nicholas of Cusa.