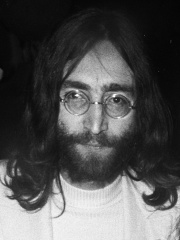 John Winston Ono Lennon (born John Winston Lennon, 9 October 1940 – 8 December 1980) was an English singer, songwriter, and peace activist who gained worldwide fame as the founder, co-lead vocalist, and rhythm guitarist of the Beatles. His songwriting partnership with Paul McCartney remains the most successful in musical history. In 1969, he started the Plastic Ono Band with his second wife, Yoko Ono. Read more on Wikipedia

Since 2007, the English Wikipedia page of John Lennon has received more than 23,594,057 page views. His biography is available in 128 different languages on Wikipedia making him the 4th most popular musician.

Among musicians, John Lennon ranks 4 out of 2,258. Before him are Bob Marley, Freddie Mercury, and Franz Liszt. After him are Niccolò Paganini, Michael Jackson, Bob Dylan, Madonna, Jimi Hendrix, Louis Armstrong, Paul McCartney, and Leonard Cohen.