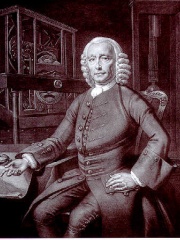 John Harrison (3 April [O.S. 24 March] 1693 – 24 March 1776) was a self-educated English carpenter and clockmaker who invented the marine chronometer, a long-sought-after device for solving the problem of calculating longitude while at sea. Harrison's solution revolutionized navigation and greatly increased the safety of long-distance sea travel. The problem he solved was considered so important following the Scilly naval disaster of 1707 that the British Parliament offered financial rewards of up to £20,000 (equivalent to £3.35 million in 2022) under the 1714 Longitude Act.In 1730, Harrison presented his first design, and worked over many years on improved designs, making several advances in time-keeping technology, finally turning to what were called sea watches. Read more on Wikipedia

John Harrison is most famous for inventing the marine chronometer.