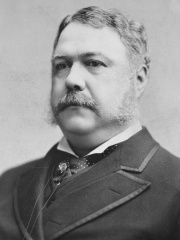 Chester Alan Arthur (October 5, 1829 – November 18, 1886) was an American attorney and politician who served as the 21st president of the United States from 1881 to 1885. Previously the 20th vice president, he succeeded to the presidency upon the death of President James A. Garfield in September 1881, two months after Garfield was shot by an assassin. Arthur was born in Fairfield, Vermont, grew up in upstate New York and practiced law in New York City. Read more on Wikipedia

Since 2007, the English Wikipedia page of Chester A. Arthur has received more than 4,185,975 page views. His biography is available in 109 different languages on Wikipedia making him the 1,894th most popular politician.

Page views of Chester A. Arthurs by language

Among politicians, Chester A. Arthur ranks 1,881 out of 14,801. Before him are Grand Duke Dmitri Pavlovich of Russia, Childeric II, Adolphe, Grand Duke of Luxembourg, James I of Scotland, Mieszko I of Poland, and Samo. After him are Robert Dudley, 1st Earl of Leicester, Ernest, Duke of Austria, Maria Anna of Bavaria, Alfonso the Battler, Sabah Al-Ahmad Al-Jaber Al-Sabah, and Jebe.