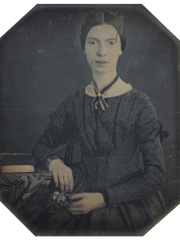 Emily Elizabeth Dickinson (December 10, 1830 – May 15, 1886) was an American poet. Little-known during her life, she has since been regarded as one of the most important figures in American poetry.Dickinson was born in Amherst, Massachusetts, into a prominent family with strong ties to its community. Read more on Wikipedia

Emily Dickinson is most famous for her poetry.

Among people born in 1830, Emily Dickinson ranks 4. Before her are Franz Joseph I of Austria, Camille Pissarro, and Abdülaziz. After her are Robert Gascoyne-Cecil, 3rd Marquess of Salisbury, Frédéric Mistral, Isabella II of Spain, Paul Heyse, Hector Malot, Julius Lothar Meyer, Porfirio Díaz, and Eadweard Muybridge. Among people deceased in 1886, Emily Dickinson ranks 4. Before her are Franz Liszt, Ramakrishna, and Ludwig II of Bavaria. After her are Leopold von Ranke, Chester A. Arthur, John Deere, Amilcare Ponchielli, Alexander Ostrovsky, Ilya Ulyanov, Alexander Butlerov, and Prince Louis, Count of Trani.