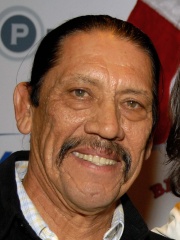 Dan Trejo (; Spanish: [ˈtɾexo]; born May 16, 1944) is an American character actor who has appeared in numerous Hollywood films, including Heat (1995), Desperado (1995), Con Air (1997), and Bubble Boy (2001); the latter with his frequent collaborator and second cousin Robert Rodriguez. Trejo is perhaps most recognized as the character Machete, originally developed by Rodriguez for the Spy Kids series of movies and later expanded into Trejo's own series of films aimed at a more adult audience. He has appeared in TV shows such as Breaking Bad, Brooklyn Nine-Nine, The X-Files, Family Guy, King of the Hill, The Flash, Sons of Anarchy, What We Do in the Shadows, American Gods, Big City Greens and Fast & Furious Spy Racers. Read more on Wikipedia

Danny Trejo is most famous for his role as a Mexican drug lord in the movie Machete.