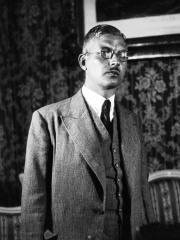 Kurt Alois Josef Johann von Schuschnigg (German: [ˈʃʊʃnɪk]; 14 December 1897 – 18 November 1977) was an Austrian Fatherland Front politician who was the Chancellor of the Federal State of Austria from the 1934 assassination of his predecessor Engelbert Dollfuss until the 1938 Anschluss with Nazi Germany. Although Schuschnigg accepted that Austria was a "German state" and that Austrians were Germans, he was strongly opposed to Adolf Hitler's goal to absorb Austria into the Third Reich and wished for it to remain independent.When Schuschnigg's efforts to keep Austria independent had failed, he resigned his office. After the Anschluss he was arrested, kept in solitary confinement and eventually interned in various concentration camps. Read more on Wikipedia

Among politicians, Kurt Schuschnigg ranks 1,436 out of 15,710. Before him are Sunjong of Korea, Millard Fillmore, Jingtai Emperor, Olybrius, Kayqubad I, and Philip of Swabia. After him are Kim Young-sam, Leo von Caprivi, Tsai Ing-wen, Alfonso VIII of Castile, James II of Aragon, and Viktor Yushchenko.