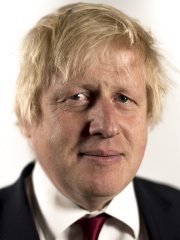 Alexander Boris de Pfeffel Johnson (; born 19 June 1964) is a British politician who served as Prime Minister of the United Kingdom and Leader of the Conservative Party from 2019 to 2022. He previously served as Secretary of State for Foreign and Commonwealth Affairs from 2016 to 2018 and as Mayor of London from 2008 to 2016. Read more on Wikipedia

Boris Johnson is most famous for being the Mayor of London. He is also a journalist and author.

Among politicians, Boris Johnson ranks 1,852 out of 15,577. Before him are Habibullāh Kalakāni, Francis, Duke of Anjou, Ludvík Svoboda, Baasha of Israel, Alexios V Doukas, and Luís I of Portugal. After him are Kenan Evren, Andrey Vyshinsky, Edward, King of Portugal, Nikolai Podgorny, Gulbuddin Hekmatyar, and Herman Van Rompuy.