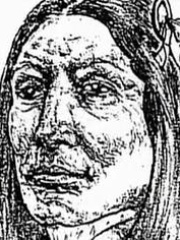 Crazy Horse (Lakota: Tȟašúŋke Witkó; IPA: [tχaˈʃʊ̃kɛ witˈkɔ], lit. ''His-Horse-Is-Crazy''); (c. 1840 – September 5, 1877) was a Lakota war leader of the Oglala band in the 19th century. He took up arms against the United States federal government to fight against encroachment by white American settlers on Native American territory and to preserve the traditional way of life of the Lakota people. His participation in several famous battles of the Black Hills War on the northern Great Plains, among them the Fetterman Fight in 1866 in which he acted as a decoy and the Battle of the Little Bighorn in 1876 in which he led a war party to victory, earned him great respect from both his enemies and his own people. In September 1877, four months after surrendering to U.S. Read more on Wikipedia

Among politicians, Crazy Horse ranks 1,308 out of 15,710. Before him are Gudea, Stephen, King of England, Zog I of Albania, Publius Cornelius Scipio, Wenceslaus III of Bohemia, and Khosrow II. After him are Emperor Kōmei, Baldwin V of Jerusalem, Alaric II, John VII Palaiologos, Minamoto no Yoritomo, and Sogdianus of Persia.