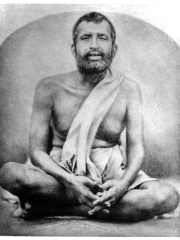 Ramakrishna Paramahamsa (Bengali: রামকৃষ্ণ পরমহংস, romanized: Ramôkṛṣṇo Pôromohôṅso; pronounced [ramɔkriʂno pɔromoɦɔŋʃo] (listen), 18 February 1836 – 16 August 1886), born Gadadhar Chattopadhyaya, was an Indian Hindu mystic and religious leader who lived in the 19th century Bengal. After adhering to practices from Bhakti yoga, Tantra, and Vedanta, as well as Islam and Christianity, he proclaimed that the world's various religions are "so many paths to reach one and the same goal". His preferred choice of deity was the goddess Kali. Read more on Wikipedia

Ramakrishna is most famous for his teachings about the unity of all religions. He believed that all religions have the same goal, which is to help people find the truth.

Page views of Ramakrishnas by language

Among philosophers, Ramakrishna ranks 71 out of 1,081. Before him are George Berkeley, Johann Gottlieb Fichte, Arius, Antonio Gramsci, Karl Jaspers, and Rudolf Steiner. After him are Epictetus, William of Ockham, Xenophanes, Jürgen Habermas, Ibn Arabi, and Friedrich Wilhelm Joseph Schelling.