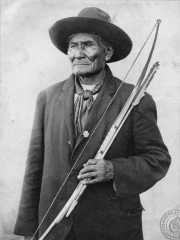 Geronimo (Mescalero-Chiricahua: Goyaałé, Athabaskan pronunciation: [kòjàːɬɛ́], lit. 'the one who yawns'; June 16, 1829 – February 17, 1909) was a prominent leader and medicine man from the Bedonkohe band of the Ndendahe Apache people, but he wasn't a chief (nantan), he was a shaman (di-yin). From 1850 to 1886, Geronimo joined with members of three other Central Apache bands – the Tchihende, the Tsokanende (i.e. the so called Chiricahua) and the Nednhi – to carry out numerous raids, as well as fight against Mexican and U.S. military campaigns in the northern Mexico states of Chihuahua and Sonora and in the southwestern American territories of New Mexico and Arizona. Read more on Wikipedia

Since 2007, the English Wikipedia page of Geronimo has received more than 5,118,838 page views. His biography is available in 63 different languages on Wikipedia (up from 61 in 2019). Geronimo is the 508th most popular politician (up from 514th in 2019), the 5th most popular biography from Mexico and the 2nd most popular Mexican Politician.

Geronimo is most famous for being a Native American warrior who fought against the United States in the Apache Wars.

Page views of Geronimos by language

Among politicians, Geronimo ranks 508 out of 15,710. Before him are Feodor I of Russia, Ferdinand III, Holy Roman Emperor, Menes, Gideon, António Guterres, and Patrice Lumumba. After him are Abd al-Malik ibn Marwan, Georges Clemenceau, Thutmose I, George II of Great Britain, Henry II, Holy Roman Emperor, and Robert Mugabe.