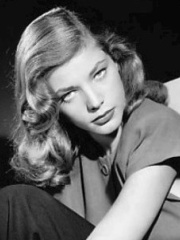 Lauren Bacall (; born Betty Joan Perske; September 16, 1924 – August 12, 2014) was an American actress known for her distinctive voice and sultry looks. She was named the 20th-greatest female star of classic Hollywood cinema by the American Film Institute and received an Academy Honorary Award from the Academy of Motion Picture Arts and Sciences in 2009 for recognition of her contribution to the Golden Age of motion pictures.Bacall began a career as a model before making her film debut as a leading lady in To Have and Have Not (1944) at the age of 19. She continued in the film noir genre with appearances with Humphrey Bogart in The Big Sleep (1946), Dark Passage (1947), and Key Largo (1948), and she starred in the romantic comedies How to Marry a Millionaire (1953) with Marilyn Monroe and Betty Grable, and Designing Woman (1957) with Gregory Peck. Read more on Wikipedia

Since 2007, the English Wikipedia page of Lauren Bacall has received more than 7,890,398 page views. Her biography is available in 74 different languages on Wikipedia making her the 208th most popular actor.