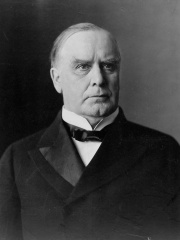 William McKinley (January 29, 1843 – September 14, 1901) was the 25th president of the United States from 1897 until his assassination in 1901. During his presidency, McKinley led the nation to victory in the Spanish–American War, raised protective tariffs to promote American industry, and kept the nation on the gold standard in a rejection of the expansionary monetary policy of free silver. McKinley was the last president to have served in the American Civil War and the only one to have started the war as an enlisted soldier, beginning as a private in the Union Army and ending as a brevet major. Read more on Wikipedia

Among politicians, William McKinley ranks 1,367 out of 15,710. Before him are Randal Cremer, Yuan Shao, Stephen V of Hungary, Mohammed Zahir Shah, Alexei Rykov, and Franklin Pierce. After him are Ernst Thälmann, Ladislaus IV of Hungary, Zbigniew Brzezinski, Algirdas, Warren G. Harding, and Philoctetes.