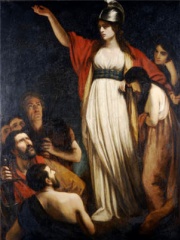 Boudica or Boudicca (UK: , US: ), known in Latin chronicles as Boadicea or Boudicea, and in Welsh as Buddug (IPA: [ˈbɨðɨɡ]), was a queen of the Iceni tribe of Celtic Britons, who led an uprising against the conquering forces of the Roman Empire in AD 60 or 61. According to Roman sources, shortly after the uprising failed, she poisoned herself or died of her wounds, although there is no actual evidence of either fate. She is considered a national heroine and symbol of the struggle for justice and independence.Boudica's husband Prasutagus, with whom she had two daughters whose names are unknown, ruled as a nominally independent ally of Rome, and left his kingdom jointly to his daughters and to the Roman emperor in his will. Read more on Wikipedia

Boudica is most famous for leading an uprising against the Roman Empire in 60 AD.

Page views of Boudicas by language

Among politicians, Boudica ranks 1,562 out of 15,577. Before her are Scorpion I, Alexios III Angelos, Nicos Anastasiades, Al-Hajjaj ibn Yusuf, Fuad I of Egypt, and Maria I of Portugal. After her are John VI of Portugal, Lucullus, Leo IV the Khazar, José Eduardo dos Santos, Chulalongkorn, and Chester A. Arthur.