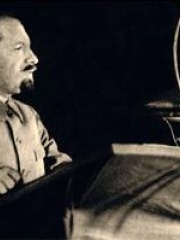 Lazar Moiseyevich Kaganovich, also Kahanovich (Russian: Ла́зарь Моисе́евич Кагано́вич; 22 November [O.S. 10 November] 1893 – 25 July 1991) was a Soviet politician and administrator, and one of the main associates of Joseph Stalin. He is known for helping Stalin come to power and for his harsh treatment and execution of those deemed threats to Stalin's regime. Born to Jewish parents in modern Ukraine, Kaganovich worked as a shoemaker and became a member of the Bolsheviks, joining the party around 1911. Read more on Wikipedia

Lazar Kaganovich was a Soviet politician and engineer who was responsible for many of the industrialization projects in the Soviet Union, including the construction of the White Sea-Baltic Canal. He was also one of the most influential members of the Soviet leadership.

Among politicians, Lazar Kaganovich ranks 1,627 out of 15,710. Before him are Horst Köhler, Ferdinand IV, King of the Romans, Diadumenian, Elisabeth of Bavaria, Queen of Belgium, Empress Lü, and Maria Josepha of Bavaria. After him are Atia, Theodore II Laskaris, James I of Scotland, Lucius Caesar, Bao Zheng, and Lü Buwei.