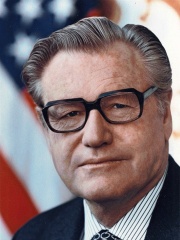 Nelson Aldrich Rockefeller (July 8, 1908 – January 26, 1979), sometimes referred to by his nickname Rocky, was an American businessman and politician who served as the 41st vice president of the United States from 1974 to 1977. A member of the Republican Party and wealthy Rockefeller family, he previously served as the 49th governor of New York from 1959 to 1973. He also served as assistant secretary of State for American Republic Affairs for Presidents Franklin D. Roosevelt and Harry S. Truman (1944–1945) as well as under secretary of Health, Education and Welfare (HEW) under Dwight D. Eisenhower from 1953 to 1954. Read more on Wikipedia

Nelson Rockefeller is most famous for his political career, including serving as Governor of New York and Vice President of the United States.

Among politicians, Nelson Rockefeller ranks 1,794 out of 15,577. Before him are Ziying, Infante Juan, Count of Barcelona, Munjong of Joseon, James E. Webb, Maymunah bint al-Harith, and Frederick Henry, Prince of Orange. After him are Yolande de Polastron, Kaidu, Ish-bosheth, Peter II of Aragon, Djet, and Princess Sibylla of Saxe-Coburg and Gotha.