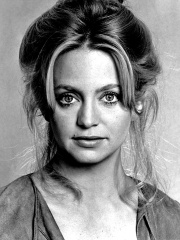 Goldie Jeanne Hawn (born November 21, 1945) is an American actress, dancer, producer, and singer. She rose to fame on the NBC sketch comedy program Rowan & Martin's Laugh-In (1968–1970), before going on to receive the Academy Award and Golden Globe Award for Best Supporting Actress for her performance in Cactus Flower (1969). Hawn appeared in such films as There's a Girl in My Soup (1970), Butterflies Are Free (1972), The Sugarland Express (1974), Shampoo (1975), Foul Play (1978), Seems Like Old Times (1980), and Private Benjamin (1980), for which she was nominated for the Academy Award for Best Actress for playing the title role. Read more on Wikipedia

Goldie Hawn is most famous for her roles in the films Cactus Flower, Private Benjamin, and The First Wives Club.