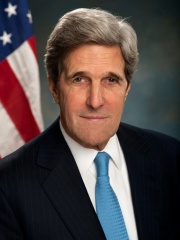 John Forbes Kerry (born December 11, 1943) is an American attorney, politician and diplomat who currently serves as the first United States special presidential envoy for climate. A member of the Forbes family and the Democratic Party, he previously served as the 68th United States secretary of state from 2013 to 2017 under Barack Obama and as a United States senator from Massachusetts from 1985 to 2013. He was the Democratic nominee for president of the United States in the 2004 election, losing to incumbent President George W. Read more on Wikipedia

John Kerry is most famous for being the Secretary of State under President Barack Obama.

Among politicians, John Kerry ranks 1,678 out of 15,577. Before him are Porfirio Díaz, Giulio Andreotti, Coloman, King of Hungary, Emperor Guangwu of Han, Lon Nol, and Mohammed V of Morocco. After him are Leopold, Duke of Lorraine, Shapur II, Teti, Li Xiannian, Béla I of Hungary, and Senusret I.