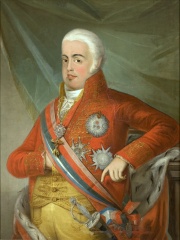 John VI (Portuguese: João VI; 13 May 1767 – 10 March 1826), nicknamed "the Clement", was King of the United Kingdom of Portugal, Brazil and the Algarves from 1816 to 1825. Although the United Kingdom of Portugal, over which he ruled, ceased to exist de facto beginning in 1822, he remained its monarch de jure between 1822 and 1825. After the recognition of the independence of Brazil under the Treaty of Rio de Janeiro of 1825, he continued as King of Portugal until his death in 1826. Read more on Wikipedia

John vi of Portugal is most famous for his role in the Portuguese succession crisis of 1580. He was the son of King Manuel I of Portugal and his second wife, Maria of Aragon. He succeeded his father to the throne in 1557.

Page views of John VI of Portugals by language

Among politicians, John VI of Portugal ranks 1,811 out of 15,710. Before him are Publius Clodius Pulcher, James IV of Scotland, Abd al-Rahman II, Sheikh Mujibur Rahman, Sophia Alekseyevna of Russia, and Burhanuddin Rabbani. After him are 1st Dalai Lama, Rodion Malinovsky, Leopold, Duke of Lorraine, John Frederick I, Elector of Saxony, Henry II of Castile, and Edgar the Peaceful.