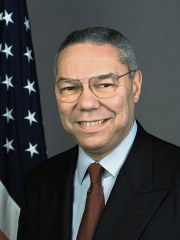 Colin Luther Powell (; born April 5, 1937) is an American politician, diplomat and retired four-star general who served as the 65th United States Secretary of State from 2001 to 2005. A member of the Republican Party, Powell was the first African-American Secretary of State. Read more on Wikipedia

Since 2007, the English Wikipedia page of Colin Powell has received more than 6,458,566 page views. His biography is available in 56 different languages on Wikipedia making him the 2,183rd most popular politician.

Among politicians, Colin Powell ranks 2,167 out of 14,801. Before him are Sophia Alekseyevna of Russia, Léon Gambetta, Gustav Bauer, Louise Mountbatten, Amel-Marduk, and Fuad Masum. After him are William I of Sicily, Kiya, Prince Edward, Duke of Kent and Strathearn, Gotse Delchev, Jehoash of Israel, and Karl Radek.