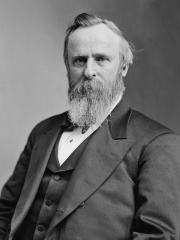 Rutherford Birchard Hayes (; October 4, 1822 – January 17, 1893) was an American lawyer and politician who served as the 19th president of the United States from 1877 to 1881, after serving in the U.S. House of Representatives and as governor of Ohio. Before the U.S. Civil War, Hayes was a lawyer and staunch abolitionist who defended refugee slaves in court proceedings. He served in the Union Army and the House of Representatives before assuming the presidency. His presidency represents a turning point in U.S. Read more on Wikipedia

Rutherford B. Hayes was the 19th president of the United States, serving from 1877 to 1881. He is most famous for ending Reconstruction in the South and withdrawing federal troops from the region.

Page views of Rutherford B. Hayes by language

Among politicians, Rutherford B. Hayes ranks 1,465 out of 15,710. Before him are Zhao Ziyang, Charlotte, Grand Duchess of Luxembourg, Haakon the Good, Yeonsangun of Joseon, Zaynab bint Jahsh, and Carloman I. After him are Cuauhtémoc, Francis I of the Two Sicilies, Georgy Lvov, John IV Laskaris, Ehud Barak, and Edmund I.