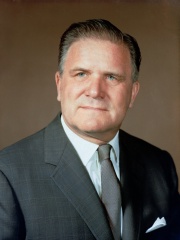 James Edwin Webb (October 7, 1906 – March 27, 1992) was an American government official who served as Undersecretary of State from 1949 to 1952. He was the second Administrator of NASA from February 14, 1961, to October 7, 1968. Webb led NASA from the beginning of the Kennedy administration through the end of the Johnson administration, thus overseeing each of the critical first manned missions throughout the Mercury and Gemini programs until days before the launch of the first Apollo mission. Read more on Wikipedia

Among politicians, James E. Webb ranks 1,791 out of 15,577. Before him are Prince Maximilian of Baden, Gordian I, Louis the Child, Ziying, Infante Juan, Count of Barcelona, and Munjong of Joseon. After him are Maymunah bint al-Harith, Frederick Henry, Prince of Orange, Nelson Rockefeller, Yolande de Polastron, Kaidu, and Ish-bosheth.