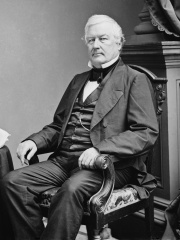 Millard Fillmore (January 7, 1800 – March 8, 1874) was the 13th president of the United States (1850–1853), the last to be a member of the Whig Party while in the White House. A former member of the U.S. House of Representatives from Upstate New York, Fillmore was elected as the 12th US Vice President in 1848, and succeeded to the presidency in July 1850 upon the death of US President Zachary Taylor. Fillmore was instrumental in the passing of the Compromise of 1850, a bargain that led to a brief truce in the battle over the expansion of slavery. Read more on Wikipedia

Among politicians, Millard Fillmore ranks 1,431 out of 15,710. Before him are Alec Douglas-Home, Halfdan the Black, Louis, Prince of Condé, Emperor Taizu of Song, Emperor Guangwu of Han, and Sunjong of Korea. After him are Jingtai Emperor, Olybrius, Kayqubad I, Philip of Swabia, Kurt Schuschnigg, and Kim Young-sam.