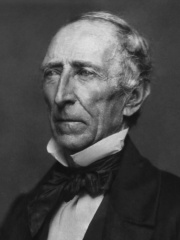 John Tyler (March 29, 1790 – January 18, 1862) was the tenth president of the United States from 1841 to 1845 after briefly serving as the tenth vice president in 1841; he was elected vice president on the 1840 Whig ticket with President William Henry Harrison. Tyler ascended to the presidency after Harrison's death in April 1841, only a month after the start of the new administration. He was a stalwart supporter and advocate of states' rights, and he adopted nationalistic policies as president only when they did not infringe on the powers of the states. Read more on Wikipedia

Since 2007, the English Wikipedia page of John Tyler has received more than 4,655,458 page views. His biography is available in 117 different languages on Wikipedia making him the 1,441st most popular politician.

Among politicians, John Tyler ranks 1,434 out of 14,801. Before him are Gudea, Conrad of Montferrat, Felix Yusupov, Tabaré Vázquez, Ehud Olmert, and Pauline Bonaparte. After him are Emperor Taizu of Song, Vasili IV of Russia, Elisa Bonaparte, Anastas Mikoyan, Ælla of Northumbria, and Mayer Amschel Rothschild.