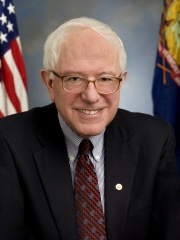 Bernard Sanders (born September 8, 1941) is an American politician and activist who has served as the junior United States senator from Vermont since 2007. He was the U.S. representative for the state's at-large congressional district from 1991 to 2007. Sanders is the longest-serving independent in U.S. congressional history. Read more on Wikipedia

Bernie Sanders is most famous for being a democratic socialist, running for president of the United States in 2016, and being a senator from Vermont.

Among politicians, Bernie Sanders ranks 554 out of 15,710. Before him are Lycurgus of Sparta, Ernst Kaltenbrunner, Juliana of the Netherlands, Edward the Elder, Ivan III of Russia, and Zoë Porphyrogenita. After him are Irene of Athens, Anthony Eden, Philip V of France, Heraklonas, Frederick William I of Prussia, and Oscar II of Sweden.