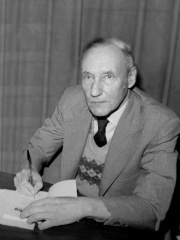 William Seward Burroughs II (; February 5, 1914 – August 2, 1997) was an American writer and visual artist, widely considered a primary figure of the Beat Generation and a major postmodern author who influenced popular culture and literature. Burroughs wrote eighteen novels and novellas, six collections of short stories and four collections of essays, and five books have been published of his interviews and correspondences; he was initially briefly known by the pen name William Lee. He also collaborated on projects and recordings with numerous performers and musicians, made many appearances in films, and created and exhibited thousands of visual artworks, including his celebrated "Shotgun Art".Burroughs was born into a wealthy family in St. Read more on Wikipedia

William S. Burroughs is most famous for his novel "Naked Lunch" and for his work as a spoken word artist.