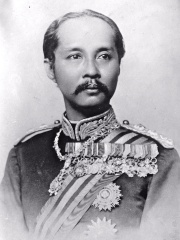 Chulalongkorn (Thai: จุฬาลงกรณ์, 20 September 1853 – 23 October 1910) was the fifth monarch of Siam under the House of Chakri, titled Rama V. He was known to the Siamese of his time as Phra Phuttha Chao Luang (พระพุทธเจ้าหลวง, the Royal Buddha). Chulalongkorn's reign was characterised by the modernisation of Siam, governmental and social reforms, and territorial concessions to the British and French. As Siam was surrounded by European colonies, Chulalongkorn, through his policies and acts, ensured the independence of Siam. Read more on Wikipedia

King Chulalongkorn is most famous for the reforms he made to the Thai government. He was the first monarch of the House of Chakri, and was known as Rama V.

Page views of Chulalongkorns by language

Among politicians, Chulalongkorn ranks 1,567 out of 15,577. Before him are Maria I of Portugal, Boudica, John VI of Portugal, Lucullus, Leo IV the Khazar, and José Eduardo dos Santos. After him are Chester A. Arthur, Leo I the Thracian, Béla III of Hungary, Lazar Kaganovich, Kurt Schuschnigg, and Anchises.