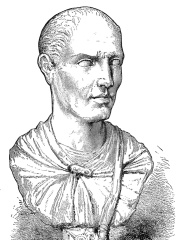 Lucius Licinius Lucullus (; 118 BC– 57/56 BC) was an optimate politician of the late Roman Republic, closely connected with Lucius Cornelius Sulla. In the culmination of over twenty years of almost continuous military and government service, he became the conqueror of the eastern kingdoms in the course of the Third Mithridatic War, exhibiting extraordinary generalship in diverse situations, most famously during the Siege of Cyzicus, 73–72 BC, and at the Battle of Tigranocerta in Armenian Arzanene, 69 BC. His command style received unusually favourable attention from ancient military experts, and his campaigns appear to have been studied as examples of skillful generalship.Lucullus returned to Rome from the east with so much captured booty that the vast sums of treasure, jewels, priceless works of art, and slaves could not be fully accounted for. On his return Lucullus poured enormous sums into private building projects, husbandry and even aquaculture projects which shocked and amazed his contemporaries by their magnitude. Read more on Wikipedia

Since 2007, the English Wikipedia page of Lucullus has received more than 269,218 page views. His biography is available in 36 different languages on Wikipedia making him the 1,371st most popular politician.

Page views of Luculluses by language

Among politicians, Lucullus ranks 1,365 out of 14,801. Before him are Theodore II Laskaris, Asa of Judah, Louis the Child, Octavia the Younger, Lon Nol, and Bernie Sanders. After him are Maria II of Portugal, Emperor Guangwu of Han, Olaf II of Denmark, Khosrow II, Empress Myeongseong, and Nicolás Maduro.

Others Deceased in 56 BC