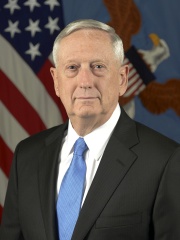 James Norman Mattis (born September 8, 1950) is a retired United States Marine Corps four-star general who served as the 26th US secretary of defense from January 2017 to January 2019. During his 44 years in the Marine Corps, he commanded forces in the Persian Gulf War, the War in Afghanistan, and the Iraq War. Mattis was commissioned in the Marine Corps through the Naval Reserve Officers' Training Corps after graduating from Central Washington University. Read more on Wikipedia

Among politicians, Jim Mattis ranks 1,143 out of 15,710. Before him are Michael VII Doukas, Emperor Wen of Sui, Tokhtamysh, Aristide Briand, As-Saffah, and Valdemar I of Denmark. After him are Karl Haushofer, Rashid-al-Din Hamadani, Damocles, False Dmitry I, Anna of Austria, Queen of Spain, and Gustav Stresemann.