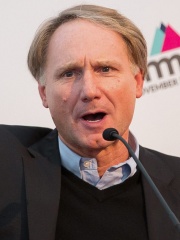 Daniel Gerhard Brown (born June 22, 1964) is an American author best known for his thriller novels, including the Robert Langdon novels Angels & Demons (2000), The Da Vinci Code (2003), The Lost Symbol (2009), Inferno (2013) and Origin (2017). His novels are treasure hunts which usually take place over a period of 24 hours. They feature recurring themes of cryptography, art, and conspiracy theories. Read more on Wikipedia

Dan Brown is most famous for his novels, The Da Vinci Code and Angels and Demons.

Among writers, Dan Brown ranks 354 out of 5,794. Before him are Théophile Gautier, Sholem Aleichem, Paul Celan, Archilochus, Paul Heyse, and W. B. Yeats. After him are Filippo Tommaso Marinetti, Jean Genet, Apollonius of Rhodes, Elfriede Jelinek, Nadine Gordimer, and Arthur de Gobineau.