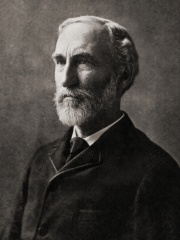 Josiah Willard Gibbs (February 11, 1839 – April 28, 1903) was an American scientist who made significant theoretical contributions to physics, chemistry, and mathematics. His work on the applications of thermodynamics was instrumental in transforming physical chemistry into a rigorous inductive science. Together with James Clerk Maxwell and Ludwig Boltzmann, he created statistical mechanics (a term that he coined), explaining the laws of thermodynamics as consequences of the statistical properties of ensembles of the possible states of a physical system composed of many particles. Read more on Wikipedia

Since 2007, the English Wikipedia page of Josiah Willard Gibbs has received more than 510,346 page views. His biography is available in 54 different languages on Wikipedia making him the 157th most popular physicist.