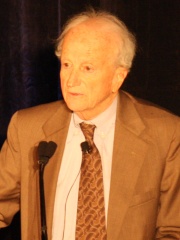 Gary Stanley Becker (; December 2, 1930 – May 3, 2014) was an American economist who received the 1992 Nobel Memorial Prize in Economic Sciences. He was a professor of economics and sociology at the University of Chicago, and was a leader of the third generation of the Chicago school of economics.Becker was awarded the Nobel Memorial Prize in Economic Sciences in 1992 and received the United States Presidential Medal of Freedom in 2007. A 2011 survey of economics professors named Becker their favorite living economist over the age of 60, followed by Kenneth Arrow and Robert Solow. Read more on Wikipedia

Since 2007, the English Wikipedia page of Gary Becker has received more than 688,403 page views. His biography is available in 57 different languages on Wikipedia. Gary Becker is the 42nd most popular economist (up from 43rd in 2019), the 647th most popular biography from United States (down from 574th in 2019) and the 9th most popular American Economist.

Gary Becker was an American economist and a professor at the University of Chicago. He is most famous for applying economic principles to other social sciences, such as sociology, criminology, and family studies.