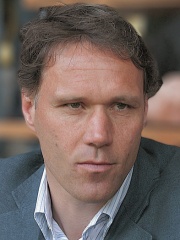 Marcel "Marco" van Basten (Dutch pronunciation: [ˈmɑrkoː vɑn ˈbɑstə(n)] (listen); born 31 October 1964) is a Dutch football manager and former professional football player, who played for Ajax and A.C. Milan, as well as the Netherlands national team, as a striker. He is regarded as one of the greatest players in the history of the sport. He scored 300 goals in a high-profile career, but played his last match in 1993 at age 28 due to an injury which forced his retirement two years later. Read more on Wikipedia

Since 2007, the English Wikipedia page of Marco van Basten has received more than 2,086,644 page views. His biography is available in 69 different languages on Wikipedia making him the 12th most popular coach.