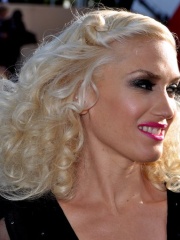 Gwen Renée Stefani (; born October 3, 1969) is an American singer, songwriter, fashion designer and actress. She is a co-founder, lead vocalist, and the primary songwriter of the band No Doubt, whose singles include "Just a Girl", "Spiderwebs", and "Don't Speak", from their 1995 breakthrough studio album Tragic Kingdom, as well as "Hey Baby" and "It's My Life" from later albums. During the band's hiatus, Stefani embarked on a solo pop career in 2004 by releasing her debut studio album Love. Read more on Wikipedia

Gwen Stefani is most famous for being the lead singer of the band No Doubt.

Among singers, Gwen Stefani ranks 87 out of 3,528. Before her are Fairuz, Rihanna, Steven Tyler, Shakira, Dieter Bohlen, and France Gall. After her are Enrique Iglesias, Georges Moustaki, Art Garfunkel, Meat Loaf, Yma Sumac, and Robin Gibb.